A solar twin in the eclipsing binary LL Aquarii 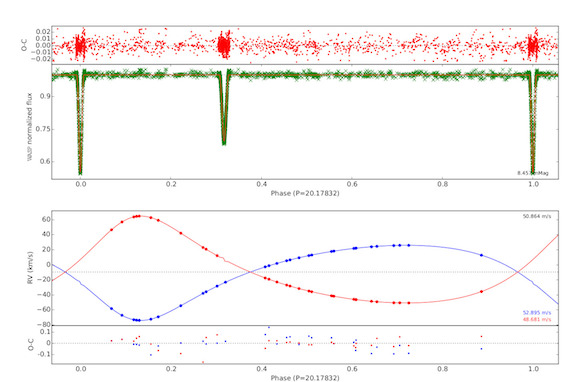 We used extensive light curve from the Super-WASP project augmented by multi-band, archival photometry to derive photometric solutions and colors of components. Using high-resolution and high-precision spectrographs, HARPS and CORALIE, we determined radial velocities and an orbital solution with the Wilson-Devinney code. Spectra of both components were decomposed and we performed a detailed atmospheric LTE abundance analysis. The atmospheric chemical composition and metallicity of LL Aqr is very close to solar one. 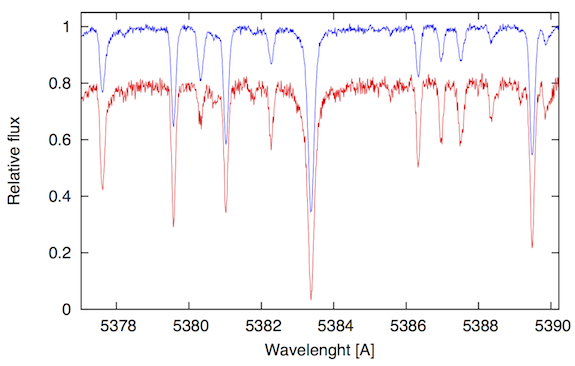 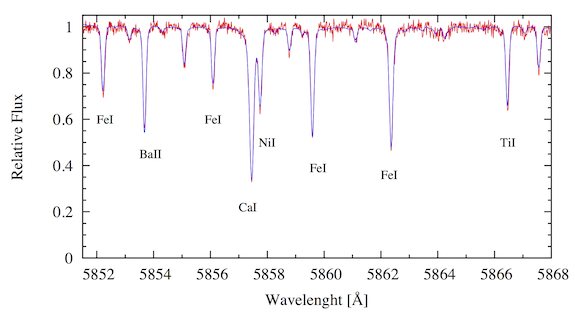 A comparison of the decomposed secondary spectrum (red line, S/N = 90) with the solar spectrum (blue line, S/N = 700) taken by UVES with a similar resolving power. Some absorption lines are labelled. The spectra are very similar.

The best fitting MESA tracks with element diffusion and allowing different values of mixing-length parameters for the models. Additional constraints were imposed on the models: αS ≥ 1.72, αS − αP ≤ 0.12 and |βP − βS| ≤ 0.4. Insert in the right panel shows comparison with observed metallicity abundance (P – the primary, S – the secondary). Position of both components are marked with errorbars. Small crosses denote position of the best fit in three dimensional space of parameters {Teff , L, R}.

The resulting highly precise stellar parameters were used for a detailed comparison with PARSEC, MESA, and GARSTEC stellar evolution models. Both stars are cooler by about 3.5σ or less metal abundant by 5σ than predicted by standard sets of stellar evolution models. When advanced modelling was performed, we found that full agreement with observations can only be obtained for values of the mixing length and envelope overshooting parameters that are hard to accept. The most reasonable and physically justified model fits found with MESA and GARSTEC codes still have discrepancies with observations but only at the level of 1σ.