Candidates for non-pulsating stars in the Cepheid instability strip

Surprising discovery of non-pulsating stars residing inside the instability of LMC Cepheids is further examined with the help of Strömgren photometry.

Based on OGLE photometric maps combined with Strömgren photometry and Gaia DR2 data for four fields in the LMC we found 19 candidates for non-pulsating stars located in empirical instability strip. An analysis of their light curves downloaded from OGLE surveys confirmed that they are stable at the level of a few of mmag. 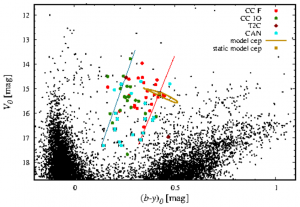 Dereddened Strömgren color-magnitude diagram for stars brighter 19 mag. Green dots mark candidates for non-pulsating stars (CAN). Blue and red lines mark the approximate position of the empirical IS determined on the basis of the OGLE cefeid and transformed into Strömgren filters.

Our results show that between about 21% to 30% of LMC giants located in the instability strip might not pulsate. More observations will be required for further investigation of the candidates, in order to find any signs of variability indicating kinds of behaviour other than classical pulsations, e.g., nonradial pulsation or binarity (where both components of the system lie in fact outside the IS).

The relation (u−b) −log P plotted for classical Cepheids identified in the fields gave us two potential candidates for binary Cepheids with hot companions and two other are questionable. These systems might be interesting for further follow up spectroscopic observations to confirm these  suspicions. 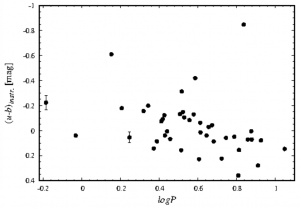 Color-period relation for classical Cepheids identified in the four fields in the LMC.