The effect of metallicity on Cepheid period-luminosity relations

Metallicity is a vital parameter that impacts classical Cepheids’ luminosities. In all observed bands, metal-poor Cepheids in the SMC are intrinsically fainter than their more metal-rich counterparts in the LMC and MW.

The extragalactic distance scale builds on the Cepheid period-luminosity (PL) relation. Decades of work have not yet convincingly established the sensitivity of the PL relation to metallicity. This currently prevents a determination of the Hubble constant accurate to 1% from the classical Cepheid-SN Ia method.

We carry out a strictly differential comparison of the absolute PL relations obeyed by classical Cepheids in the Milky Way (MW), LMC, and SMC galaxies. Taking advantage of the substantial metallicity difference among the Cepheid populations in these three galaxies, we want to establish a possible systematic trend of the PL relation absolute zero point as a function of metallicity, and to determine the size of such an effect in the optical and near-infrared photometric bands.

Firstly, direct distance determinations to sizeable samples of Cepheids in the Milky Way, LMC and SMC galaxies were obtained, using the Infrared Surface Brightness Technique. This is a type of Baade-Wesselink method, which utilizes the stellar radial pulsation to determine the distance and radius of the star. Then we used these distances to determine absolute Cepheid PL relations in the optical and near-infrared bands in each of the three galaxies. 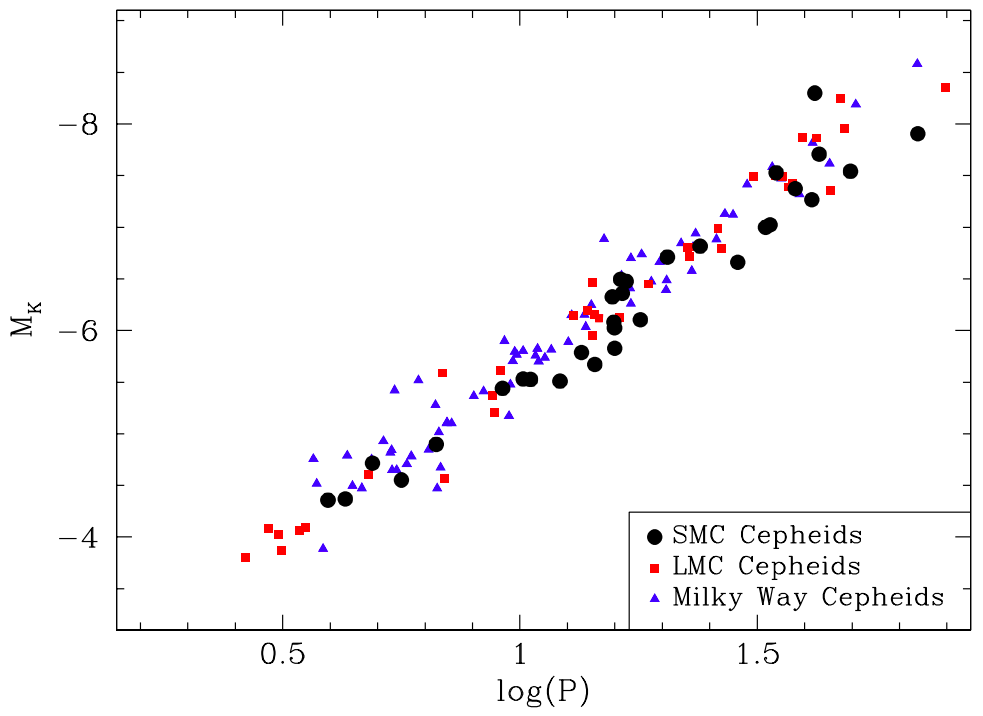 Our distance analysis of 31 SMC Cepheids with periods of 4-69 days yields tight PL relations in all studied bands, with slopes consistent with the corresponding LMC and MW relations. Adopting the very accurately determined LMC slopes for the optical and near-infrared bands, we determine the zero point offsets between the corresponding absolute PL relations in the three galaxies.

We find that in all bands the metal-poor SMC Cepheids are intrinsically fainter than their more metal-rich counterparts in the LMC and MW. In the K band the metallicity effect is -0.23 ± 0.06 mag/dex, while in the V, (V–I) Wesenheit index it is slightly stronger, -0.34 ± 0.06 mag/dex. We find suggestive evidence that the metallicity sensitivity of the PL relation might be nonlinear, being small in the range between solar and LMC Cepheid metallicity, and becoming steeper towards the lower-metallicity regime. 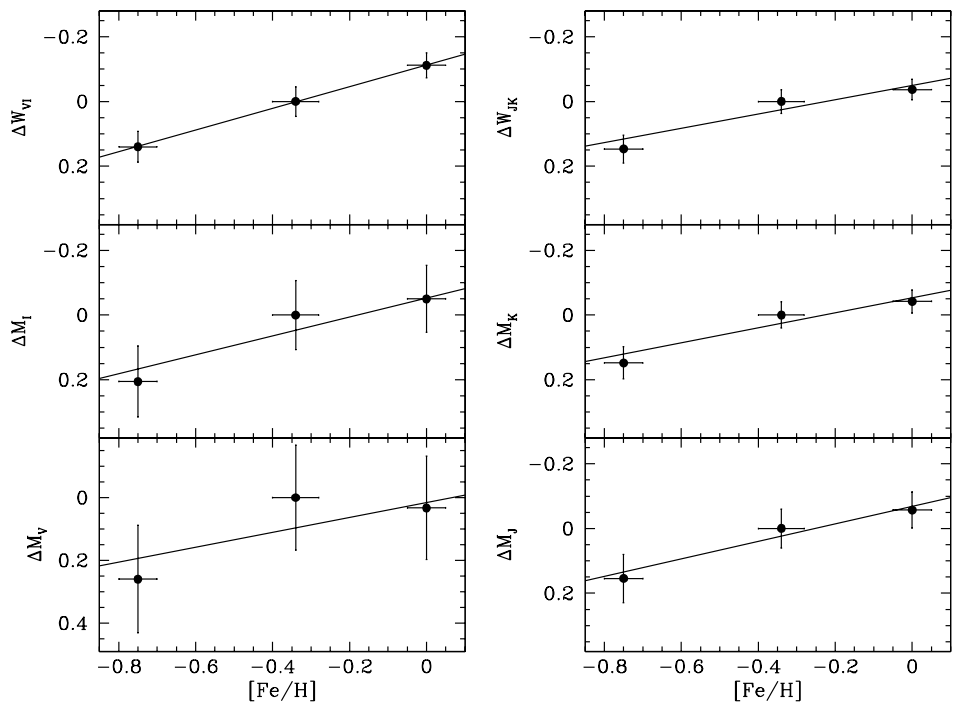 The luminosity zero-point offsets in the different passbands as a function of the metallicity of each of the samples (SMC, LMC, and MW) with the associated error bars. The lines represent the statistically most plausible model.

The ∆M versus [Fe/H] relation for the various bands in the form ∆M = γ[Fe/H] + ψ. The fitting errors σ(γ) and σ(ψ) based on Markov Chain Monte Carlo analysis is given as well.

We argue that the K-band Cepheid PL relation continues to be the best tool to determine the distances to late-type galaxies. However, the mild but significant metallicity effect determined in this paper should be taken into account, which obviously requires an estimate of the average metallicities of the Cepheid samples used in such determinations.
Share