We have obtained extensive high-quality spectroscopic observations of the OGLE-LMC-CEP-1718 eclipsing binary system in the Large Magellanic Cloud that Soszynski et al. had identified as a candidate system for containing two classical Cepheids in orbit. Our spectroscopic data clearly demonstrate binary motion of the Cepheids in a 413 day eccentric orbit, rendering this eclipsing binary system the first ever known to consist of 2 classical Cepheid variables.

After disentangling the four different radial velocity variations in the system, we present the orbital solution and the individual pulsational radial velocity curves of the Cepheids. We show that both Cepheids are extremely likely to be first overtone pulsators and determine their respective dynamical masses, which turn out to be equal to within 1.5%. Since the secondary eclipse is not observed in the orbital light curve, we cannot derive the individual radii of the Cepheids, but the sum of their radii derived from the photometry is consistent with overtone pulsation for both variables. 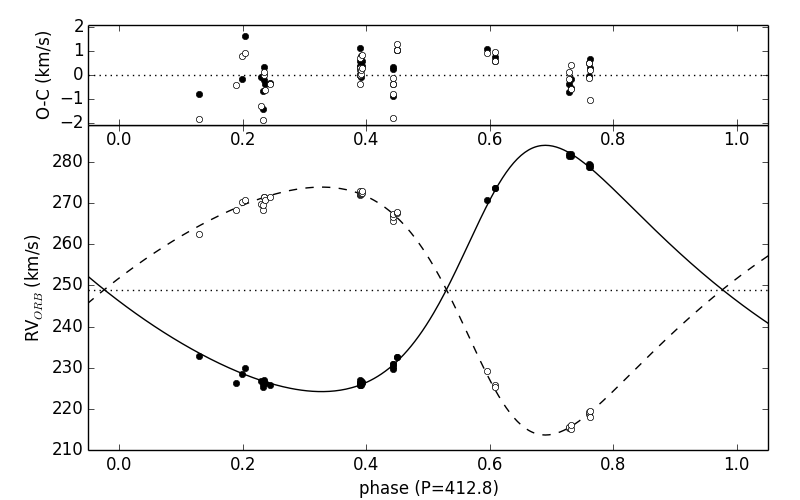 The existence of two equal-mass Cepheids in a binary system having different pulsation periods (1.96 and 2.48 days, respectively) may pose an interesting challenge to stellar evolution and pulsation theories, and a more detailed study of this system using additional data sets should yield deeper insight about the physics of stellar evolution of Cepheid variables. Future analysis of the system using additional near-infrared photometry might also lead to a better understanding of the systematic uncertainties in current Baade-Wesselink techniques of distance determinations to Cepheid variables.