Measurements of parallaxes of 81 detached eclipsing binary stars in the Milky Way allowed for the determination of the global zero-point shift in the Gaia Data Release 2 (DR2) parallaxes.

The shift in the zero-point of Gaia Data Release 2 (DR2) parallaxes was calculated as a difference between Gaia parallaxes and photometric parallaxes for 81detached eclipsing binaries in the Milky Way. The stars in the sample lay in a distance range of 0.04–2 kpc from the Sun. The photometric parallaxes ϖPhot of the eclipsing binaries were determined by applying a number of empirical surface brightness-color (SBC) relations calibrated on optical-infrared colors. For each SBC relation we calculated the individual differences dϖi = (ϖGaia − ϖPhot)i and then we calculated unweighted and weighted means. As the sample covers the whole sky we interpret the weighted means as the global shifts of the Gaia DR2 parallaxes with respect to our eclipsing binary sample. Depending on the choice of the SBC relation the shifts vary from −0.094 mas to −0.025 mas. These significant differences of the zero-point shifts result from applying 1) different SBC calibrations, and 2) different colors. The weighted mean of the zero-point shift from all colors and calibrations used is dϖ = −0.054 ± 0.024 mas. However, the SBC relations based on (B−K) and (V −K) colors, which are the least reddening dependent and have the lowest intrinsic dispersions, give a zero-point shift of dϖ = −0.031 ± 0.011 mas. We confirm the global shift of Gaia DR2 parallaxes of dϖ = −0.029 mas reported by the Gaia Team (Lindegren et al. 2018; Arenou et al. 2018), but we do not confirm the larger zero-point shift reported by a number of follow-up papers. 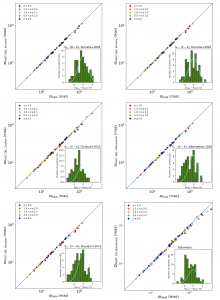 Direct comparison of the Gaia and the photometric parallaxes for a few surface brightness-color relations. Histograms show the amount of systems with a given uncertainty of dϖ. The Gaussians show expected distribution if no the offset would be present.