The Araucaria Project: The Distance to the Carina Dwarf Galaxy from Infrared Photometry of RR Lyrae Stars

We present distance modulus to the Carina dwarf spheroidal galaxy obtained from single-phase near-infrared magnitudes in the J– and K-band for a sample of 33 RR Lyrae (RRL) stars. The sample was carefully chosen from data published by Dall’Ora et al. (2003, AJ, 126, 197), who provided also RRL pulsational periods. 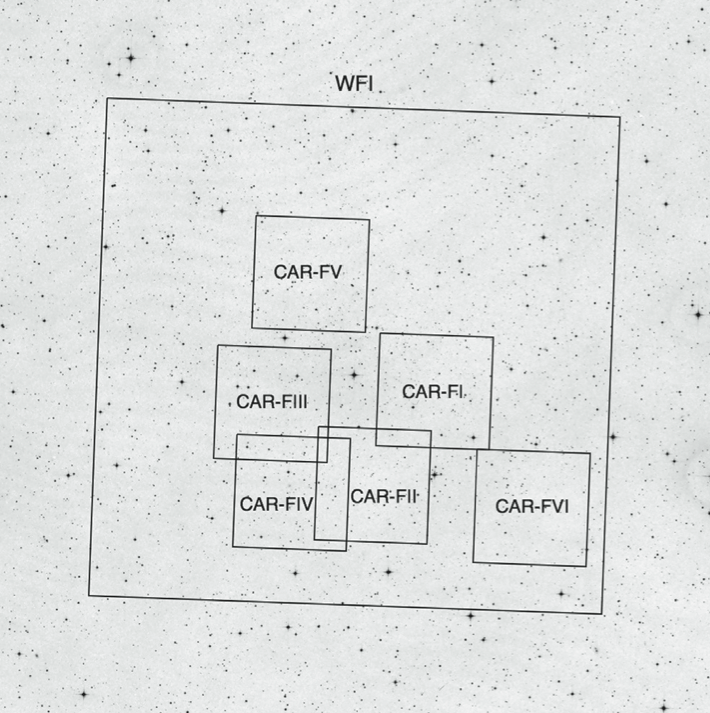 Carina galaxy. Six fields observed with HAWK-I infrared camera (mounted on VLT telescope, Paranal, Chile) together with one filed observed with WFI camera and used in study of Dall’Ora et al. (2003, AJ, 126, 197) to determine pulsational periods of RR Lyrae stars therein. Overlapping areas share 33 RR Lyrae stars which were used in our study to derive distance to the Carina galaxy.

Near-infrared (NIR) photometry of RRLs, while minimizing the influence of both interstellar extinction and metallicity on the RRL luminosity, reveals a linear relationship between the luminosity and the metallicity and the logarithm of pulsational period, i.e. the PLZ relation. 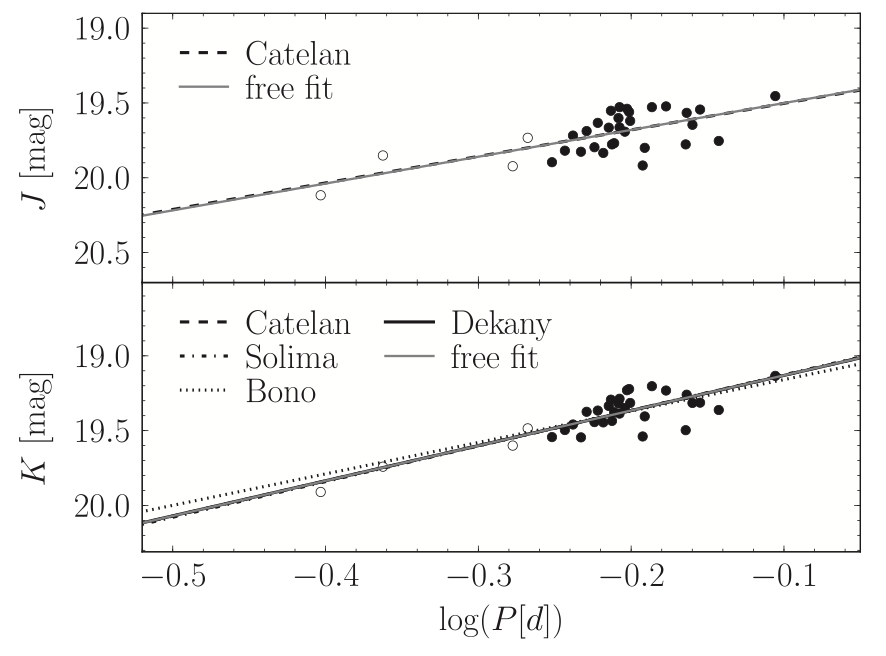 Apparent magnitudes of Carina RRL stars (RRab – filled circles, RRc – open circles) as a function of their log pulsational period. Lines denote different slopes of PLZ relations exerted from the literature. The observed scatter is related mostly to the single phase nature of our photometry.

The zero point of the calibration, corrected for the effect of metallicity and interstellar extinction (both from literature), yielded the true distance modulus of 20.118 ± 0.017 (stat.) ± 0.110 (syst.) mag.

Our results are consistent with other distance determinations obtained within the Araucaria Project from NIR photometry of red clump stars (20.165 ± 0.015 mag) and the tip of red giant branch (20.09 ± 0.03 ± 0.12 mag in the J-band, 20.14 ± 0.04 ± 0.14 mag in the K-band), as well as with most independent distance determinations to the Carina galaxy. The NIR RRL method once more proves to be a reliable tool for accurate distance determination at the 5% level or better, particularly for galaxies and globular clusters that lack young standard candles, like Cepheids.